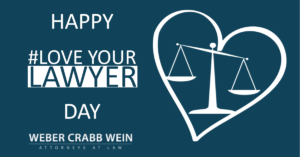 Hold the lawyer jokes- at least for today.

With or without lawyers, you’re going to live in a world with rules and without someone to regulate, defend you when accused of violation of, or uphold those rules- well, who would?

Of the 10 key framers of our constitution, 7 were lawyers (John Adams, Thomas Jefferson, James Monroe, James Wilson, George Wyeth, Edmund Randolph, and John Dickerson.) These men were instrumental in the framework of the constitution and understood the critical importance of guidelines for the protection of our citizens.

Your right to vote- or do many things (if you are black or a woman especially you) The Nineteenth Amendment became part of the U.S. Constitution 1920. It states, “The right of citizens of the United States to vote shall not be denied or abridged by the United States or by any State on account of sex.” Lawyers helped petition the Supreme Court, lobbied to Congress, and defended scores of women who protested their rights to vote in the United States.

Without lawyers such as Thurgood Marshall and many others, it is quite possible that many folks would find themselves attending separate school, eating at separate lunch counters, drinking from separate public water fountains, and riding in the back of the bus. This is not the society of freedom we envisioned or a place we would want to live.

Lawyers protect consumers. From stopping lead based paints that caused thousands of toddler and infant deaths to exploding gas tanks (Ford and Pinto) or drugs administered to pregnant women that caused severe abnormalities (thalidomide)…lawyers protect us and build a better tomorrow.

And, Lawyers help us build better communities. Protecting and defending us- in business, civil matters, criminal prosecution and defense, in helping us adopt new members of our family and peacefully dividing journeys to start new chapters of our life. They help by keeping our family exposure low to those who would intend to hurt or divide us.

And so today, no jokes, nothing but sincere thanks to all our fellow lawyers.

A Worker’s Right to Strike…Sometimes.

When Employees Leave Are Your Trade Secrets Protected?

Were you terminated from your job legally?