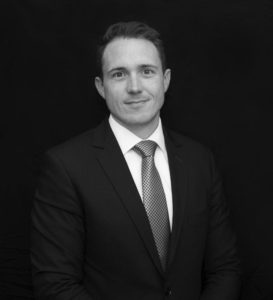 Kyle Bass is an Associate with the firm practicing general Civil and Commercial Litigation.

Kyle attended Stetson University in DeLand, FL where he earned a Bachelor of Business Administration degree in Accounting and Business Law.  Upon graduation he then attended Stetson University College of Law in St. Petersburg, FL where he earned his Juris Doctor degree along with a Certificate of Concentration in Advocacy.  During his time at Stetson Law, Kyle was awarded both the Leadership Award as well as the William F. Blews Award for his effort and dedication to legal pro bono services.

Prior to joining Weber, Crabb & Wein, Kyle represented the People of the State of Florida as an Assistant State Attorney for the 6th Judicial Circuit, in Pinellas County. As an Assistant State Attorney, Kyle prosecuted hundreds of cases from intake through various stages, up to and including trial, with charges ranging from Domestic Battery, Assault, Theft, and Driving Under the Influence, amongst others.

While at the State Attorney’s Office, Kyle was commissioned into the United States Army as an Officer in the Judge Advocate General Corps (JAG).  Most recently, Kyle was assigned to Fort McNair and Joint Base Myer-Henderson Hall in the Military District of Washington in Washington, D.C. where he assisted service members with legal issues ranging from Contract Disputes to Dissolution of Marriage to Military Administrative Actions. From Washington, D.C., Kyle was stationed at Fort Gordon in Augusta, GA with the U.S. Army Signal Corps and the Cyber Center of Excellence. While at Fort Gordon, Kyle focused primarily on providing legal assistance for Administrative Actions as well as drafting countless Wills and other Estate Planning documents for deploying soldiers and units.

Following his time at Fort Gordon, Kyle returned to his home state of Florida where he accepted a position at a prominent Insurance Defense Firm as an Associate Attorney. While there, Kyle gained valuable experience defending numerous First-Party insurance claims and representing clients in different capacities, from pre-suit investigations and coverage matters through different stages of litigation.

Kyle continues to proudly serve as a Captain in the United States Army Reserves. As a Reserve Officer, Kyle is attached to the 154th TDS LOD where he is tasked with fighting for and defending soldiers’ rights in all aspects of military actions and proceedings.

Kyle is a member of the Florida Bar.